Most duners know of or have visited the big three sand-oriented OHV areas in California. Together the Oceano SVRA, Dumont, and of course, the Imperial Sand Dunes supply the vast bulk of dune related recreation in the Golden State. There are three other much smaller locations that also offer sand related OHV opportunities. The Heber Dunes State Vehicle Recreation Area managed by California State Parks is south of El Centro, west of Holtville, and just three miles north of the International Border. It offers great day use opportunities for beginning to intermediate sand enthusiasts. Also, in the California Desert are the Olancha Dunes. These dunes are managed by the Bureau of Land Management and lie just to the east of Highway 395, north of Jawbone Station, and south of Lone Pine. They contain the sands blown southward from Owens Lake. There are 1000 acres of OHV opportunity and open camping with a 14-day stay limit. Way to the north, the BLM operates Samoa Dunes OHV Area at the tip of the Samoa Peninsula across Humboldt Bay from the city of Eureka. This area has sand dune trails and approximately a mile of open beach riding. There is a camping area near the Coast Guard Station that allows direct dune access from the asphalt camping area. 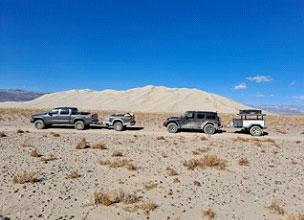 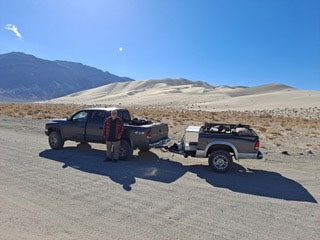 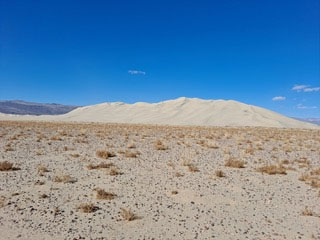 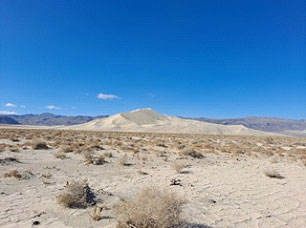 There are several other large and small dune areas in California that are closed to OHV. On the coast almost all of the beaches were motorized accessible until the 1970s. At that time, places like Morro Bay, Guadalupe, Seaside near Monterey, and the Ventura County Beaches were stripped of motorized access in exchange for a permanent State Vehicle Recreation Area at Pismo/Oceano. As we well know, this promise is now in jeopardy!

Four-wheel-drive clubs and early dune buggy clubs also flocked to two other large dune areas in the California Desert, the Kelso Dunes south of Baker California, and the Eureka Dunes east of Big Pine California. To a lesser extent, the Cadiz Dunes south of Amboy and east of Twentynine Palms received OHV activity. There are several dune areas near or within Death Valley that were once open to motorized exploration that have now been closed.

We must go as far back as Thomas Jefferson sending Lewis and Clark to “OPEN” the West. With his vision of resources exploration and development, agriculture and grazing opportunities, homesteading and population expansion, it became the model for well over 150 years guiding the American West. This legacy included the creation of some of the greatest National Parks in America and saw the creation of the U.S. Forest Service and the Bureau of Land Management. The National Park system was created for preservation of both natural and cultural points of significance. The Forest Service and BLM were created to equitably balance the management of resources, development, watershed management and agriculture and grazing interests.

The late 1960s and 1970s introduced into the mainstream the idea of “CLOSING” the West. Rooted in the idea that local control created bad management, that any profits from activities on the public lands were ill begotten, and protectionism over multiple use of public lands was best for society, the pressure on Congress grew significantly. The passages of the Wilderness Act, Endangered Species Act, the Clean Water Act, the National Environmental Policy Act, the Federal Land Management Policy Act, the Clean Air Act, and constant litigation gave the “CLOSING” advocates the upper hand in land management policy.

By the mid-1970s, the California Desert was Ground Zero of these efforts. It started with the RARE studies (Roadless Area Review and Evaluation) that set about to identify areas of the desert for Wilderness designation. These back-to-back studies identified approximately 2 million acres to be set aside. The Eureka, Kelso, Cadiz, and North Algodones Dunes were included in the proposed Wilderness. These proposals were included into the 1980 California Desert Plan that to this day is the framework for management of the California Desert.

Not satisfied with the Desert Plan’s Wilderness additions, the “CLOSING” advocates chose to use Alan Cranston and then Dianne Feinstein to push for nearly 8 million acres to be set aside in new National Park lands and BLM administered Wilderness Areas. OHV proponents in those days pushed back against the idea of making any area south of Highway 78 into Wilderness and demanded the exclusion or modification of complete OHV closure to both Eureka and Kelso Dunes. This Congressional battle raged until the passage of the California Desert Protection Act in 1994. This left only the very northern tip of the Algodones Dunes known as Mammoth Wash, the area south of Highway 78, and the Dumont Dunes as the dominant OHV sand opportunities in the California Desert.

This in no way quelled the desires of the “CLOSING” advocates. They came back again full throttle during the Recreation Area Management Plan for the Imperial Dunes demanding the area between Gecko and Gordon’s be off-limits to OHV. It took the formation of the ASA along with the coordinated efforts of other statewide and national organizations to fend off these demands. The ASA’s steadfast advocacy remains the firewall to the loss of even more OHV opportunity. It is easy to look back and see the fight over Eureka and Kelso as ancient history but it is more important to look back and realize that that fight will never stop. As long as there are people gathered together in advocacy against our sport and with the idea that exclusion is the best management policy, we all need to learn from this history to protect and maintain our access to public lands.

Over twenty years ago, the ASA was formed on the principles of UNITE, INFORM, and MOBILIZE. Not only did it work then, it is even more critical today.

Unite equals…YOU joining ASA with your dollars! Every advocacy organization needs funding and membership numbers to be effective and relevant!

Mobilize is… YOU being the voice of information for your dune group, attending meetings, writing letters and comments, and volunteering where you can.