#9 - Why is flying the CHECKERED FLAG important TODAY?

During Thanksgiving Weekend in 1999 a ranger was knocked down at the Glamis Sand Drags; this was not good for us. That event drew attention all the way to Washington DC. The Sierra Club demanding the dunes be CLOSED because a reasonable amount of safety could not be maintained. A non-environmental issue, to be sure, but ammunition they could use just the same. 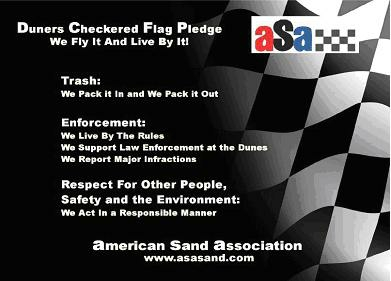 For two hours they interrogated Jerry Seaver, chair of the TRT, co-founder of the ASA, and the ASA president. Their big question was that they wanted to be sure that the dune community was behind the law enforcement community. The only proof Jerry could offer was that a grassroots movement, led by Jerry Shaffer of the Az Burros Buggy Club,had just recently sprung up. That movement being called the CHECKERED FLAG movement.

Checkered flags stand for our support of law enforcement.

Luckily, when this group took their tour of the dunes, they saw a few of them. Talk about dumb luck. Okay, fast forward to President's Day weekend when Jerry Seaver gets a phone call from Washington DC regarding that meeting ̶ it took them that long to finalize their report.

Wait, Johnson tells Jerry that he has good news for us ̶ they are NOT GOING TO CLOSE THE DUNES!!

"What??" you're probably asking yourself.

Yes, folks, it really did come that close. They came down looking to close the dunes permanently.

As it turns out, BLM CAN CLOSE THE DUNES IN 24 HOURS if they have a good enough reason.

Therefore, we need to get as many CHECKERED FLAGS ON WHIPS out there as possible.

So, let's do this folks... and show them that we are behind them 120% percent,
and get checkered flags on EVERY OHV in the dunes!

The American Sand Association's Board of Directors primary objective is to "UNITE, INFORM and MOBILIZE" the sand duning community to protect the right to ride.