#14 - Sleuthing the Secrets of Peirson’s Milkvetch

Riding around in the dunes with some of the most expert drivers and searching for rare plants – every botanist’s dream! I was truly blessed to be able to do just that for seven years, make some great friends, and learn all kinds of interesting things about the unique flora of the Algodones dunes.

The odyssey started in early 2000 when Peirson’s milkvetch (PMV), a small denizen of the dunes that had been listed as a Threatened species a few years before, became the focal point of a lawsuit by the Center for Biological Diversity. Their claim was that the BLM was not managing for the conservation of the species, and the result was a closure to OHV use of some 49,000 acres of the Algodones dunes. The response was the formation of ASA and a concerted effort to find out what was going on – and to reopen the large proportion of the dunes that had suddenly become off-limits to vehicular recreational use.

I was asked if I could help. Having had some 25 years of experience working with Endangered Species matters, and 30 years of so traipsing through the deserts of the Southwest, this sounded to me like an interesting project, and a problem that I might be able to help unravel.

I spent a day duning with folks such as Grant George, looking at PMV all over the place and quickly learning how to hang on! That evening I sat down with the ASA board for a frank discussion of how they perceived the situation and what I had learned about the plant.

ASA president Bob Mason said “We know we have a problem. We don’t want to jeopardize the plant, but we want to keep the dunes open for the recreation that our community loves.” I liked that approach. I told the Board that I would be glad to study the situation but as a scientist who works hard to maintain objectivity and has frequently worked “on the other side” of rare plant conflicts I could not guarantee what my conclusion would be. Bob said “I like that. You’re just the man we want.” Thus was born a seven-year collaboration.

Fortunately the winter of 2000-01 had been unusually rainy, and PMV and its plant-world neighbors had responded accordingly. In short, it was “all over the place!” Well, not quite; one of the first things I observed, which the drivers I was with knew well, was that it is actually found in specialized predictable places, along with the dozen or so other plants that have adapted to living in this special, very difficult habitat. Shifting sand, low rainfall, and long hot summers do not make for your typical ideal plant environment. The plant inhabitants typically grew more or less together in bowls and such places where the sand was somewhat stable and where moisture was retained in the sand a few inches deep.

Duners don’t like places like that. They are full of dead wood and shrubs like Wiggins’ croton and desert buckwheat. Their stiff, sharp dead branches are all over the sand just waiting to puncture a buggy tire. When run over, the living plants explode in a shower of twigs that is rather unpleasant for riders. While the slipfaces are fun to run, the floors of the bowls with their miniature forests are to be avoided. So they don’t go there, as many duners have told me.

Having quickly learned that PMV doesn’t grow everywhere, we set out to find specific places where it does occur. With the aid of the rather new technology of GPS we scoured the dunes for places where it grows. We found and mapped some 128 places in the open areas. The initial survey involved dozens of duners; this volunteer help was absolutely essential to the success of the mission. Sites were circumscribed using the GPS, and PMVs were counted. Altogether we counted more than 71,000 plants, at sites ranging from just a few to nearly 4,000 individuals. We rounded out the 2001 surveys with a helicopter survey of the closures, allowing us to locate and note PMV occurrences. From this we prepared a map of PMV distribution throughout the dune system. This map, with revisions, was used by both BLM and the U.S. Fish and Wildlife Service in subsequent documents.

Next we developed a multi-year project visiting 25 random-selected sites each year to count plants, note their ages and flowering condition, and correlate their success with seasonal rainfall. As all duners know, some years at ISD are rainy and others are nearly rain-free. Some years we found thousands of PMV; other years a few hundred; sometimes almost none. The shrubs endure the drought; PMV relies on a seed bank, where seeds remain dormant in the sand during dry times and germinate by the thousands when it has is wet.

Again, the duning community responded magnificently to help out with transporting us from site to site and getting involved with the counting, giving up part of their weekends to help the cause. This went on for seven years. It was a magnificent group effort. 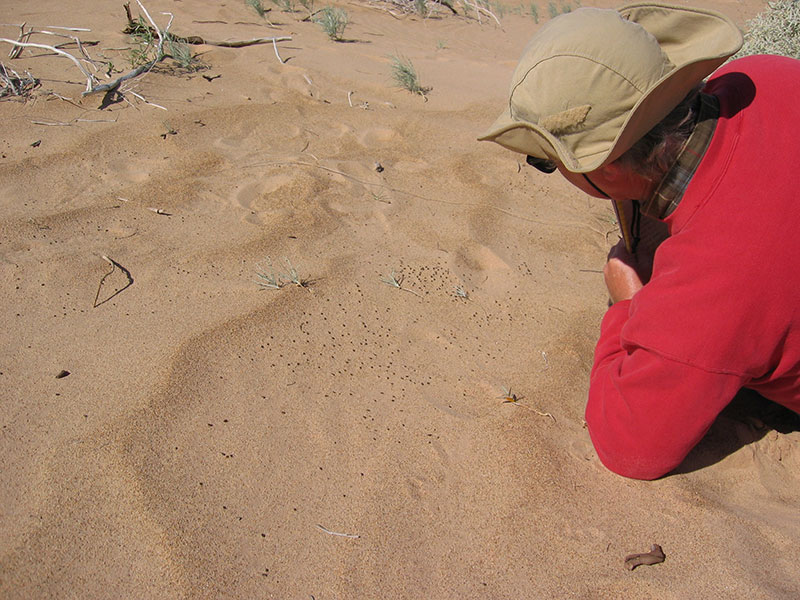 Another piece of the puzzle was to study the seed bank. We wanted to find out how many seeds were dormant in the sand, just waiting for the right conditions to germinate and grow. We carried out seed bank studies twice, using metal frames pushed into the sand and sifting sand through soil sieves to capture seeds, then extrapolating to the whole dune system. Our estimate was that over 3 million seeds lay dormant in the sand, a number that was consistent between the two seed bank studies. While living plant numbers vary greatly between seasons, the dormant seeds are there, just waiting …  Again, many volunteers made it possible, sifting hundreds of pounds of sand to capture the sleeping seeds.

Our studies provided a well-rounded and objective view of the ecology, distribution, and life history of PMV. In the end the closures were not eliminated, but they reduced significantly and redrawn to fit the plant’s distribution. It was truly a joint effort with many botanists and other plant lovers, along with many duners providing expertise and logistical support that together made a robust study possible. Those trips and the friendships they kindled are an outstanding memory for me.

Dr. Art Phillips has studied the plant life of the Southwest for more than 50 years. His specialties include ecology of rare and endangered species, and flora of the Grand Canyon. He received a B.S. in Botany from Cornell University and a M.S. and Ph.D. in Botany and Plant Ecology from the University of Arizona. He was Research Botanist and Curator of Biology at the Museum of Northern Arizona in Flagstaff for 14 years before starting an environmental consulting business, working on botanical projects throughout the Southwest. He retired (more or less) in 2012 and now lives on the Western Slope of Colorado.