#16 - Glamis Folklore: Strange Things in the Dunes (Part I)

The story goes that sometime during World War II, three Lockheed P-38 Lightning military planes were returning to a training base in Holtville, California, when they got caught in a storm over what is known today as the Imperial Sand Dunes Recreation Area (ISDRA) along thne California/Mexico border. The planes, one piloted by an instructor and the other two by trainees, crashed into the dunes. The instructor and one of the trainees survived.

Both walked east through the dunes and were picked up at the train tracks that border the eastern edge. But the other trainee and all three planes were lost to time, assumed to have been buried by the wind-driven sand. Legends say the ghost of the lost pilot still haunts the washes where thousands of off-roaders camp every year. The planes and pilot are missing to this day. 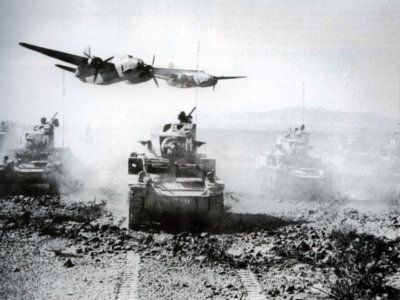 Similar stories claim that several Army M4 Sherman tanks are also buried out in the dunes. General George S. Patton frequently used the area from the Mexican border all the way north of the Salton Sea for training maneuvers. The story goes that the tanks broke down and were just too heavy to recover from the soft sand. Another version of the story goes that Patton purposely buried the tanks as part of a strategy that would allow the Army to quickly counter an enemy invasion from the south with an armored unit already in place.

Since then, people have searched the dunes for the rumored missing armor, but none have succeeded. Buried tanks sound like barroom apocrypha, until you hear that a military convoy from that same era was discovered in the washes about halfway between Interstate 78 to the north and Interstate 8 to the south. One of the vehicles was a bus riddled with bullet holes that remained intact into the 1990s. The vehicles were used as targets during tank training exercises. They have since been removed by the Bureau of Land Management, which oversees the ISDRA.

Jeff Henson is an off-road ATV racer, duner and dirt bike rider. He has also held editor positions with various ATV related publications such as ATV Sport Magazine, ATV Magazine and ATV Illustrated Magazine. Currently, Jeff is the Executive Editor for ATVRider.com and a Contributing Editor for UTVDriver.com.