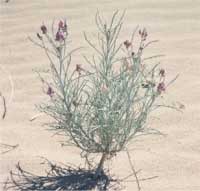 In March 2000, the Center for Biological Diversity (CBD), Sierra Club and Public Employees for Environmental Responsibility (PEER) filed a lawsuit against the Bureau of Land Management (BLM) claiming that the BLM failed to initiate and complete consultation with the U.S. Fish and Wildlife Service as required by section 7 of the Endangered Species Act. The Endangered Species Act (ESA) is a very broadly written federal law that was enacted in 1973. Due to its broad nature, the ESA is ripe for abuse by special interest groups like the CBD, Sierra Club, and PEER.

The Endangered Species Act specifically states that the term “species” includes any subspecies of fish, wildlife, or plants. Without this broad definition, the Peirson’s milk vetch would have never been listed to begin with because the species as a whole is intact and thriving. Without the listing of this subspecies, the closures would not have been possible. The ESA allows anyone to petition the Fish and Wildlife Service to have a species listed or reclassified as endangered or threatened. Unfortunately, the ESA allows these petitions to be based solely on “best available science” rather than requiring science that stands up to critical peer review. Of all the listed species, only 23 have been “delisted” since 1973. Of these 23 species, 12 have been delisted due to errors in the original data. Simply stated, it was proven that those 12 species should have never been listed in the first place.

The Peirson’s milk vetch (PMV) was listed in 1998 by comparing data from a 1977 study to data in a 1990 study because that was the “best available science” rather than requiring the group filing the petition to conduct new studies. In the 2000 Dunes monitoring report, done by the BLM, the 1990 study is declared flawed due to the methodology used. The ASA believes, based on biological surveys of the PMV that were recently completed on our behalf, that the PMV is one of those species which should have never been listed.