How about some recent photos of the crash site in the dunes: 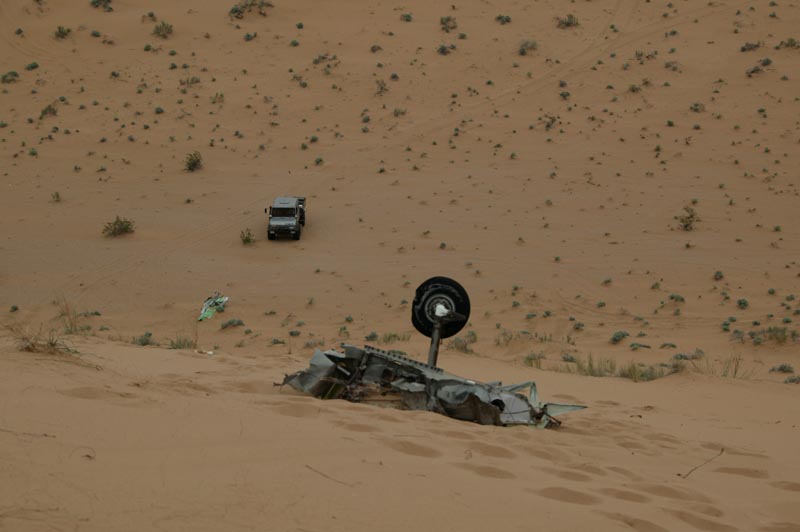 (Oh, you didn't assume I ment in the ISDRA did you?

It is very close to Glamis though

Thats a Unimog at the bottom, didn't a group drive through the Mexico dunes south of San Luis last year?
(The above statement is my own opinion and not that of the ASA's.)

Is your spouse an ASA member??? Numbers count!!

As bad as the crash looks, it also looks like they were able to walk away from it

....and at the end of that light there is another tunnel
Top

I know. That's me on the far left.

A great flic, naw how 'bout Lauren Bacall, circa "To have and have not".

djw wrote:
naw how 'bout Lauren Bacall, circa "To have and have not".

How about Snoopy instead?

I know. That's me on the far left.

And NOW, you're saying that YOU were the mastermind of this serade?

Yea... With a little help from... Well, I'll keep that a Secrete. But he did write this to go along with it.

UNDER INVESTIGATION: There is a twin engine Air Force plane in the Dunes. The most recent wind storm finally exposed the long rumored existence of this relic. As the story goes... the plane had engine trouble and the pilot managed to set down "along the side a long steep hill" and bounced over several small dunes coming to rest fairly intact. The pilot and co-pilot ,shaken, bruised and disoriented, managed to walk to the railroad tracks and summon help. Fierce winds for the next several days made an aerial search risky and also covered those portions of the plane not already under sand from the impact. The pilot and co-pilot were later unable to retrace their steps and find the exact location of the plane. The pilot, Capt. John Kelly is now a captain for Quantas and the Co-pilot, 1st Lt. Gelrullup now owns and operates a restaurant in Duncan, Idaho.

Recent wind storms have, at last, uncovered the aircraft. (submitted by GOL visitor)

Hey guys, is the REAL plane site in the central closed area??? I put the coordinates in my GPS and went out to Gordons last week. When I got to the south side of the central closure, the plan site was still 10+ miles away. I didn't want to take a chance of going all the way around the closure and not be able to get to it once I got to Road Runner.

When the RAMP is implemented, you will need to get an AMA riding permit to legally go there.
(The above statement is my own opinion and not that of the ASA's.)

Is your spouse an ASA member??? Numbers count!!

When the RAMP is implemented, you will need to get an AMA riding permit to legally go there.

10-4. I'm planning on being one of the first. Thanks!
GLAMISBOUND
Walking the gap...All give some, some give all!!

The "REAL" site is in the closed areas.

The photo I posted is of a crash site in Mexico in the Altar dunes which are cut off from the ISDRA by the colorado river valley.
Jason Hitesman - N8INJ - Blog
DunePhotos.com
YumaDuners Member
BLM all purpose answer generator
Top
Post Reply
16 posts • Page 1 of 1